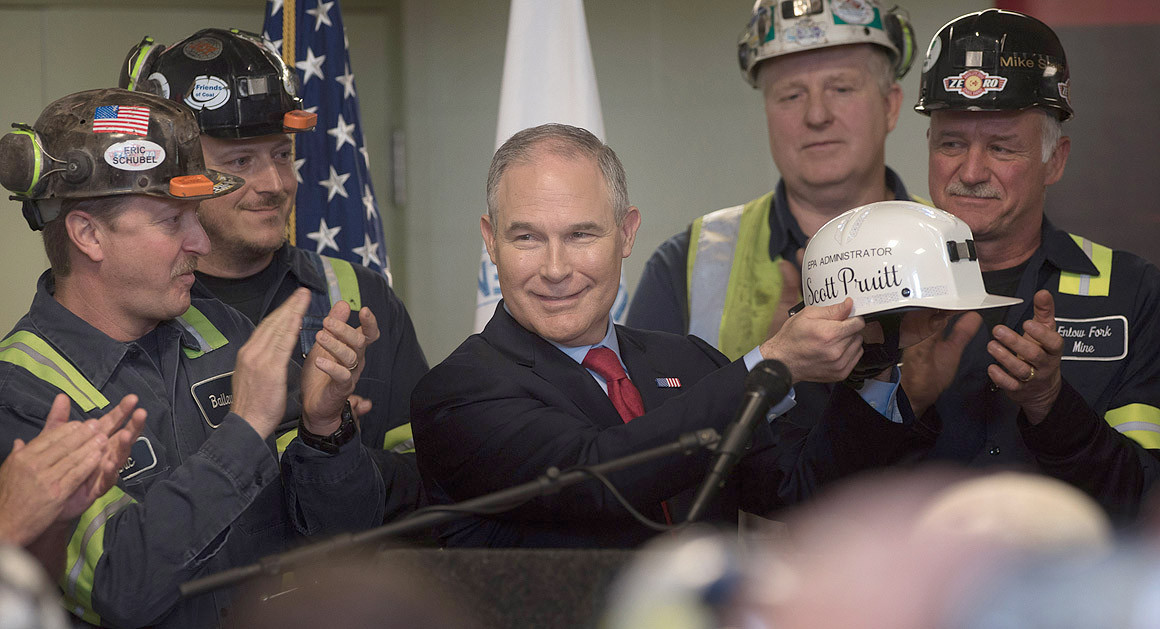 What Administrator Scott Pruitt calls his “Back to Basics” agenda would refocus the agency on narrow goals such as cleaning up toxic waste and providing safe drinking water — the kinds of issues that inspired the EPA’s creation in 1970 amid a public outcry about burning rivers and smog-filled skies. But it would abandon the Obama administration’s climate regulations, along with other efforts that Pruitt argues exceed the agency’s legal authority.

President Donald Trump has endorsed this notion as well, promising that the U.S. will have “the cleanest air” and “the cleanest water” even in his speechthis month repudiating the Paris climate agreement.

Pruitt has labeled this vision “EPA originalism,” in a nod to someconservatives’ long-running arguments that judges should interpret the Constitution as the Founders understood it. But several former EPA chiefs say Pruitt and Trump have it wrong — and that the agency’s mission was never as narrow as the current administration wants it to be.

Christine Todd Whitman, George W. Bush’s first EPA administrator, disputes Pruitt’s decision to focus on a limited set of EPA programs, such as the toxic-waste cleanups it carries out under the 1980 Superfund law.

“I don’t think it has to be an either-or, nor should it be,” Whitman said, adding: “Superfund is not the only issue for human health. Water pollution is a huge issue and very important and you need to work on it, but it’s not the only issue. Air is an issue, too. Even if you don’t want to believe in climate change, you’ve got to believe that carbon and mercury are not good for you.”

EPA did not make Pruitt available for an interview, but he told Wall Street Journal columnist Kimberley Strassel that his aim is for EPA to achieve “tangible” results through “a restoration of its priorities,” such as cleaning up the nation’s 1,300 Superfund sites.

“These are issues that go directly to the health of our citizens that should be the absolute focus of this agency,” Pruitt told Strassel, who was the first to praise him as an “EPA originalist.” Pruitt added: “This president is a fixer, he’s an action-oriented leader, and a refocused EPA is in a great position to get results.”

Pruitt has also defended Trump’s proposal for a 31 percent budget cut at his agency in fiscal year 2018, which would force it to shed about a fifth of its workforce — saying EPA’s core functions would survive. “I believe we can fulfill the mission of our agency with a trimmed budget, with proper leadership and management,” he said at an appropriations hearing that had him fielding complaints from Republicans and Democrats alike.

On the other hand, Trump’s proposal would slash many of the same toxic-waste and clean-water programs that Pruitt has put at the center of the agency’s mission.

The tension highlights disputes over EPA’s role as environmental threats have evolved, as well as the Trump administration’s efforts to achieve lasting reductions in the government’s regulatory powers.

So far, Pruitt has launched rollbacks of Obama’s greenhouse gas rules for power plants, delayed deadlines for polluters and slowed agency work on new regulations, and most recently helped persuade Trump to withdraw from the Paris deal.

Pruitt has also placed a greater emphasis on considering economic concerns in the agency’s decisions. He has cited that reasoning when he has rolled back regulations on climate change, air pollution and clean water, even in cases where the Supreme Court has said costs cannot factor into a regulation.

“We’re going to improve the environment in this country, protect our water, protect our air, but at the same time do it the American way,” Pruitt said in an April speech at a coal mine in Sycamore, Pennsylvania. “Grow jobs and show the rest of the world that we can achieve it.”

But the powers of the EPA administrator are limited: While he or she can have huge influence over the agency’s direction, Congress has laid out its scope and responsibilities in laws like the Clean Air Act and Clean Water Act.

That means Pruitt cannot act like a “tinhorn dictator” by deciding which laws to avoid “in favor of economic development,” said Thomas Jorling, a former Senate Republican staffer who co-authored the Clean Air Act in 1970 and the Clean Water Act in 1972. Jorling, who filed a court brief last year defending the Obama EPA’s landmark climate regulation, accused Pruitt of being “disingenuous” by focusing the agency on a limited set of priorities.

“It’s all basically a smokescreen to their real intention, which is kind of a moral and ethical corruption, to … restore the dependence of the United States energy system on fossil fuels,” Jorling said.

Pruitt maintains that the agency’s Obama-era leaders vastly overstepped EPA’s authority by issuing regulations such as its greenhouse gas limits for power plants. Pruitt previously made that argument while waging legal fights against the EPA when he was Oklahoma attorney general.

Pruitt said last month that he has not yet decided whether to craft new climate rules after repealing the Obama versions.

But his Republicans critics say it’s wrong to reject climate change as an EPA priority, even if there’s room for debate on the scope of Obama’s actions. The Supreme Court has ruled that EPA must regulate greenhouse gases if they threaten human health and welfare, which the agency has concluded they do.

“There’s a lot more uncertainty around [global warming], but that doesn’t mean you don’t deal with it,” he said.

Meanwhile, the rollbacks under Pruitt go well beyond climate change. Pruitt has ordered a rewrite of the Obama-era Waters of the U.S. rule, a sweeping regulation that sought to define which waterways and wetlands fall under the federal government’s purview. And he remains critical of the Obama administration’s efforts to tighten smog standards when much of the country has yet to meet previous limits — even though the Clean Air Act says EPA is supposed to base those decisions solely on the latest health science.

In addition, Pruitt has said his philosophy will involve fewer instances of the federal government overriding state cleanup plans it deems insufficient. And he says EPA will use fewer consent decrees — settlements negotiated with companies that have violated regulations — a practice Republicans have long criticized as “regulation by litigation.”

Instead, Pruitt aims to focus on the Superfund program, cleanups of polluted “brownfields,” and drinking water infrastructure, all of which involve economic development. He has also placed an emphasis on implementing last year’s bipartisan chemical safety reforms, especially the process that approves new chemicals for use in products.

Myron Ebell, a longtime critic of climate change science and the Trump administration’s former transition leader for EPA, supports Pruitt’s originalism mission because it dials back the agency’s reach.

“But over time and particularly in the Obama administration, they have taken on a whole lot of things which are entirely discretionary, that they don’t have to do, they’re not required by law to do it, but they decided to do it anyway,” Ebell added.

But Jorling, the former Republican staffer, said people like Ebell have their history wrong.

Jorling said he and Leon Billings, his late Democratic counterpart in writing the landmark air and water laws that Pruitt is now entrusted to enforce, believed that the statutes they wrote were not static. Instead, they were designed to adapt to new situations.

Georgetown environmental law professor William Buzbee agreed that the laws’ legislative history shows they were “not written to be frozen in time, but to give EPA important protective roles that will evolve in light of improved science and understanding of emerging risks.”

For example, the Clean Air Act includes a catch-all provision, Section 111, that allowed the agency to address newly discovered pollutants not covered elsewhere in the law. EPA had used that provision just five times over the decades, mostly on obscure pollutants, before the Obama administration wielded it to target carbon dioxide from power plants.

Gina McCarthy, Pruitt’s immediate predecessor as EPA administrator, said it’s “crazy” to believe that the agency’s role was not intended to evolve to include new problems like climate change.

“Is EPA supposed to respond and say, ‘We’re really busy cleaning up Superfund sites from the ’60s. We really can’t address the problems that you’re facing today?’” McCarthy asked. “Is that what they’re really suggesting? And as long as we catch up with the damage that was in place when these laws came in, that we’ll have done our job? That doesn’t make any sense.”

Read this article on POLITICO.